How to write your own Patenting New Technology Proposal 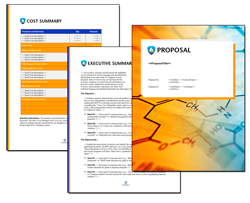 Screenshots of 4 of 6 pages of this sample. 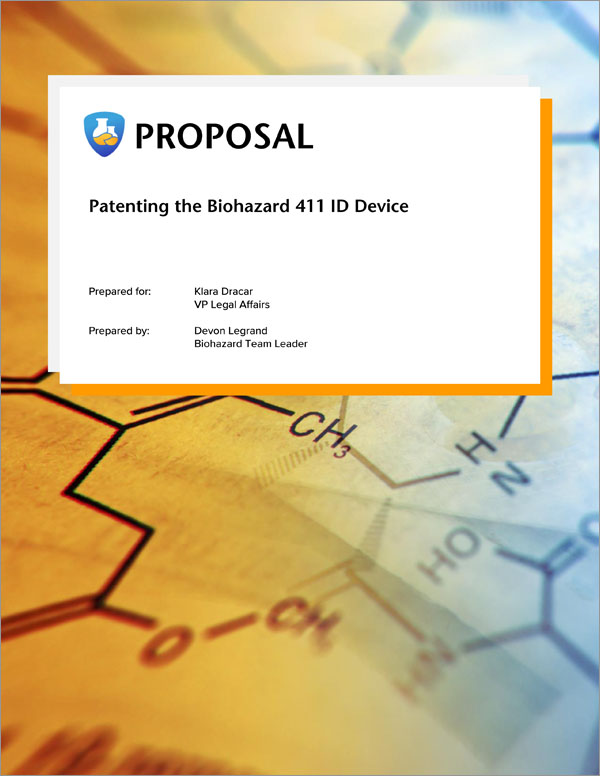 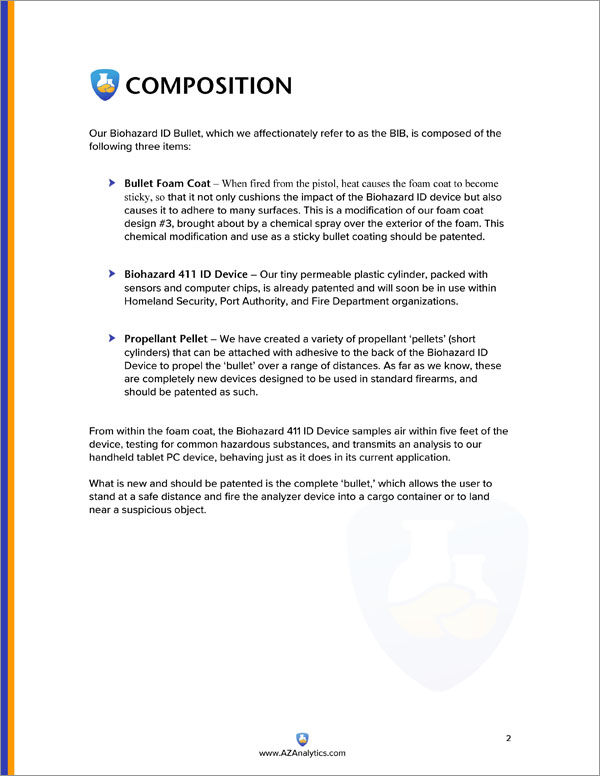 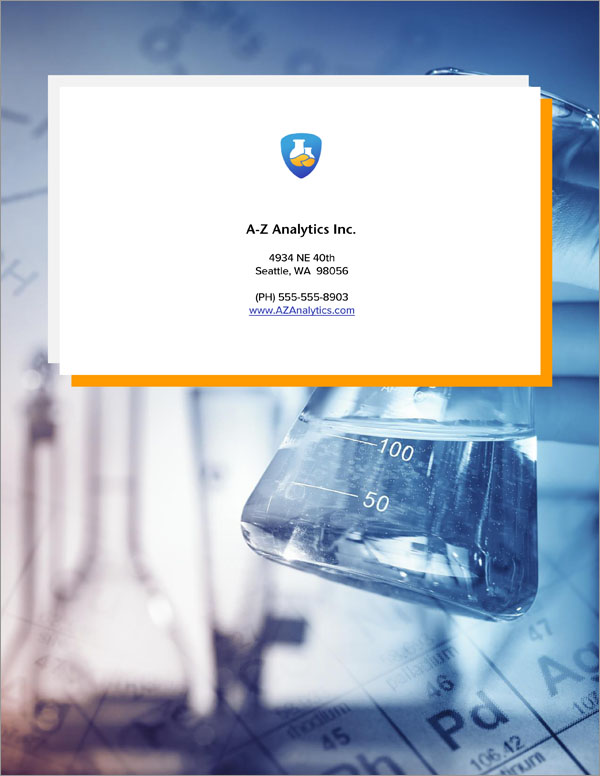 This Patenting New Technology Sample Proposal is included in both PDF format and editable Word format chapters that can also be customized using the included Wizard software.

The Patenting New Technology Sample Proposal is an example of a proposal using Proposal Pack to pitch an internal company project to patent a new technology.

This is a good example to follow for anyone proposing internal company projects.

Anyone proposing internal company projects or proposing to patent a new invention.

The Biohazard Team in the Z Analytics Research and Development Department would like to propose that our company patent new technology that we have developed to deploy our existing Biohazard ID Device. We want to see this vital intellectual property protected for the exclusive benefit of Z Analytics. We feel that Z Analytics has number of opportunities to benefit from the proposed patent of the Biohazard ID Bullet. Opportunity #1 Using the Biohazard ID Bullet technology we are likely to sell more of our existing Biohazard ID analyzer devices because everyone can recognize the benefit of being able to stand at safe distance and ‘fire’ the device into cargo container or at suspicious object.

We know that our competition has been working hard to come up with an analytical device similar to the Biohazard ID device. By patenting our new ‘bullet’ delivery system we will maintain our competitive advantage longer. Opportunity #2 We believe that our new adhesive bullet technology might be used to deliver other devices.

For example it’s possible that we could apply this delivery technology to listening or motion sensor devices including our own Listen bugging device. We believe that police and other security professionals could be quite excited at the possibility of firing listening device through an open window to monitor activity that’s out of sight. This might also have an application in cases of building collapse in earthquakes to fire various monitoring devices into the rubble to find survivors. Our Biohazard ID Bullet which we affectionately refer to as the BIB is composed of the following three items.

Bullet Foam Coat – When fired from the pistol heat causes the foam coat to become sticky so that it not only cushions the impact of the Biohazard ID device but also causes it to adhere to many surfaces. This is modification of our foam coat design #3 brought about by chemical spray over the exterior of the foam. This chemical modification and use as sticky bullet coating should be patented.

Biohazard ID Device – Our tiny permeable plastic cylinder packed with sensors and computer chips is already patented and will soon be in use within Homeland Security Port Authority and Fire Department organizations. Propellant Pellet – We have created variety of propellant ‘pellets’ short cylinders that can be attached with adhesive to the back of the Biohazard ID Device to propel the ‘bullet’ over range of distances. As far as we know these are completely new devices designed to be used in standard firearms and should be patented as such.

From within the foam coat the Biohazard ID Device samples air within five feet of the device testing for common hazardous substances and transmits an analysis to our handheld tablet PC device behaving just as it does in its current application. What is new and should be patented is the complete ‘bullet ’ which allows the user to stand at safe distance and fire the analyzer device into cargo container or to land near suspicious object. The following company personnel contributed to the development of the "Biohazard ID Bullet". Killdeer developed the chemical spray that forms sticky coating for the foam covering of the ‘bullet’.

Cal White – Mechanical Engineer Biohazard Team Mr. White former firearms instructor in the U.S. Marines designed the size and shape of the explosive ‘pellets’ that adhere to and propel the Biohazard ID Device. Lance Halder Chemical Engineer Biohazard Team Mr. Halder perfected the explosive powders used in the propellant pellets. Variety of his mixtures can be used to propel the sampling device variety of distances.

Devon Legrand Industrial Engineer Team Lead Biohazard Team Ms. Legrand came up with the concept of firing the sampling device from distance and worked on the general design for the ‘bullet’. The Biohazard Team in the Z Analytics Research and Development Department would like to propose that our company patent new technology that we have developed to deploy our existing Biohazard ID Device. We want to see this vital intellectual property protected for the exclusive benefit of Z Analytics.

We have developed an innovative system that turns our existing Biohazard ID Device into ‘bullet ’ which allows it to be propelled from several firearms with sticky cushioned coating that will adhere to many surfaces. This offers security officers or first responders the ability to stand at safe distance from the suspect material to be analyzed. The Biohazard Team has included the relevant information along with this letter.

Please contact us for the details you will require to apply for patent.

Proposal Pack is absolutely AWESOME. It saves me a ton of time when I am responding to RFPs for my Destination Management Company. Once you get the initial documents set up it takes no time to go in and make a few changes. Try it out. I’m sure you’ll love it."

There are thousands of proposal topics to choose from in Proposal Pack. This sample uses the following set of Proposal Pack topics: Cover Letter, Title Page, Opportunities, Composition, Personnel, Back Page.
There are 200 complete sample proposals including this one in Proposal Pack.