How to write your own New Sales Office Proposal 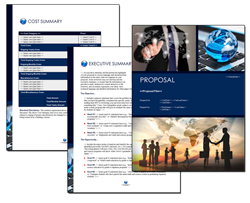 Screenshots of 4 of 8 pages of this sample. 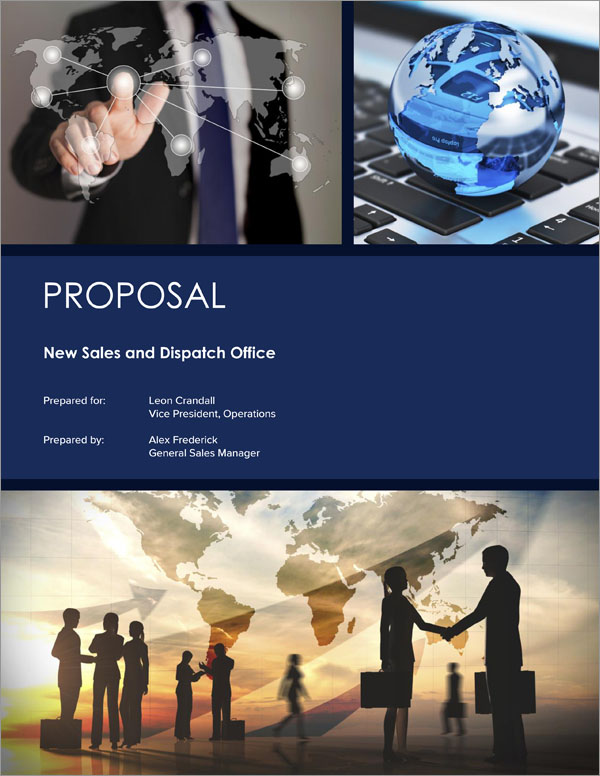 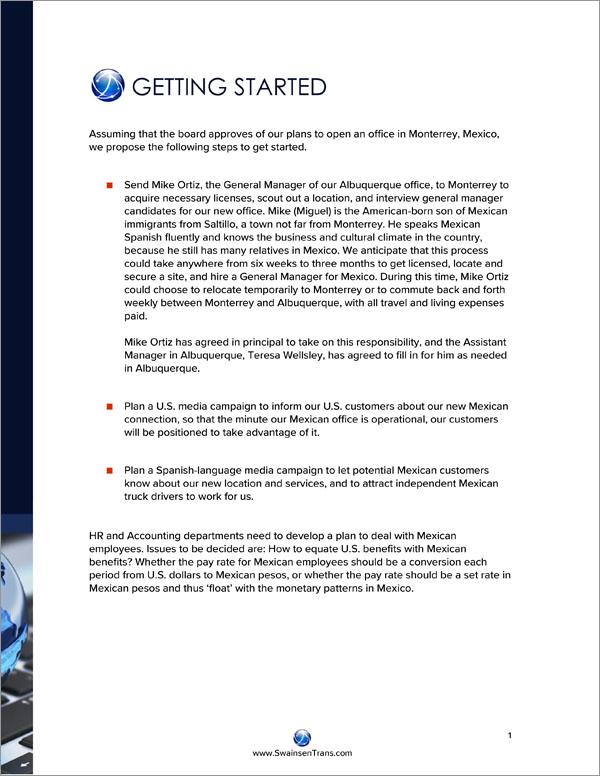 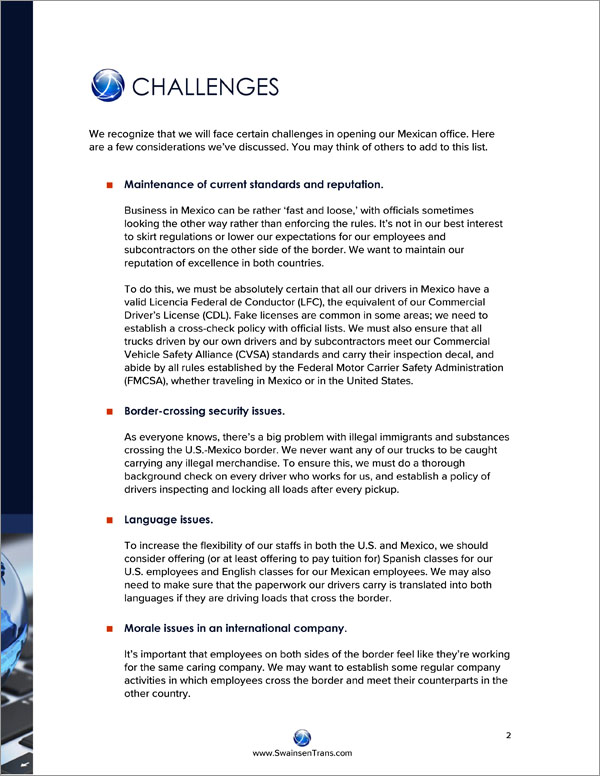 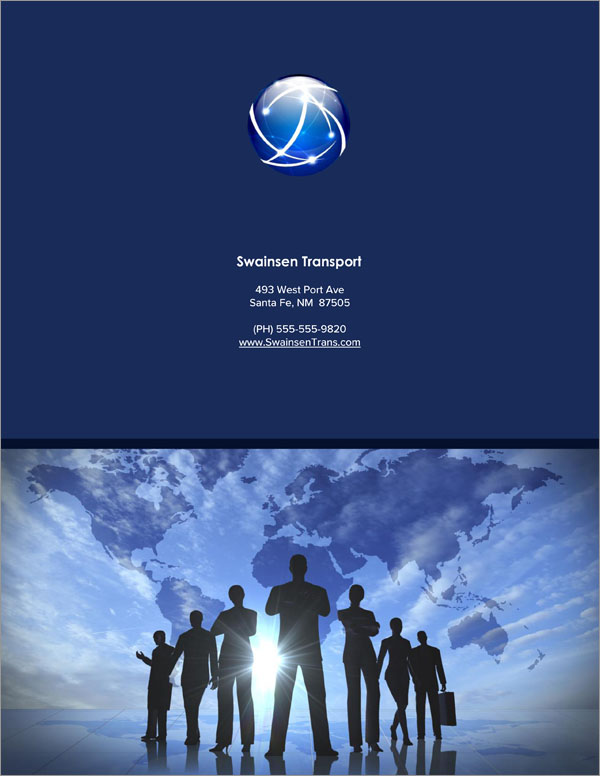 This New Sales Office Sample Proposal is included in both PDF format and editable Word format chapters that can also be customized using the included Wizard software.

The New Sales Office Sample Proposal is an example of a proposal using Proposal Pack to pitch an internal company proposal for opening a new sales office.

This is a good example to follow for anyone proposing a business expansion or growth proposal.

Anyone proposing a business expansion or growth proposal.

Please find enclosed an analysis and position descriptions for proposed new sales and dispatch office in Monterrey, Mexico. Swainsen Transport is already well known in the southwestern United States, and we believe that it is now in our company’s best interest to open an office in Mexico as soon as possible. Assuming that the board approves of our plans to open an office in Monterrey, Mexico, we propose the following steps to get started. Send Mike Ortiz, the General Manager of our Albuquerque office, to Monterrey to acquire necessary licenses, scout out location, and interview general manager candidates for our new office.

Mike Miguel is the American born son of Mexican immigrants from Saltillo, town not far from Monterrey. He speaks Mexican Spanish fluently and knows the business and cultural climate in the country, because he still has many relatives in Mexico. We anticipate that this process could take anywhere from six weeks to three months to get licensed, locate and secure site, and hire General Manager for Mexico.

During this time, Mike Ortiz could choose to relocate temporarily to Monterrey or to commute back and forth weekly between Monterrey and Albuquerque, with all travel and living expenses paid. Mike Ortiz has agreed in principal to take on this responsibility, and the Assistant Manager in Albuquerque, Teresa Wellsley, has agreed to fill in for him as needed in Albuquerque. Plan U.S. media campaign to inform our U.S. customers about our new Mexican connection, so that the minute our Mexican office is operational, our customers will be positioned to take advantage of it. Plan Spanish language media campaign to let potential Mexican customers know about our new location and services, and to attract independent Mexican truck drivers to work for us.

HR and Accounting departments need to develop plan to deal with Mexican employees. Issues to be decided are. How to equate U.S. benefits with Mexican benefits.

You may think of others to add to this list.

Maintenance of current standards and reputation

Business in Mexico can be rather ‘fast and loose,’ with officials sometimes looking the other way rather than enforcing the rules. It’s not in our best interest to skirt regulations or lower our expectations for our employees and subcontractors on the other side of the border. We want to maintain our reputation of excellence in both countries. To do this, we must be absolutely certain that all our drivers in Mexico have valid Licencia Federal de Conductor LFC the equivalent of our Commercial Driver’s License CDL.

Fake licenses are common in some areas; we need to establish cross check policy with official lists. We must also ensure that all trucks driven by our own drivers and by subcontractors meet our Commercial Vehicle Safety Alliance CVSA standards and carry their inspection decal, and abide by all rules established by the Federal Motor Carrier Safety Administration FMCSA whether traveling in Mexico or in the United States. Border crossing security issues.

As everyone knows, there’s big problem with illegal immigrants and substances crossing the U.S.

We never want any of our trucks to be caught carrying any illegal merchandise. To ensure this, we must do thorough background check on every driver who works for us, and establish policy of drivers inspecting and locking all loads after every pickup.

To increase the flexibility of our staffs in both the U.S. and Mexico, we should consider offering or at least offering to pay tuition for Spanish classes for our U.S. employees and English classes for our Mexican employees. We may also need to make sure that the paperwork our drivers carry is translated into both languages if they are driving loads that cross the border. Morale issues in an international company.

It’s important that employees on both sides of the border feel like they’re working for the same caring company. We may want to establish some regular company activities in which employees cross the border and meet their counterparts in the other country. You may be asking, "Why Monterrey, Mexico. Why not the capital, Mexico City.

" Here’s our reasoning on choosing Monterrey as the best location for new office.

Monterrey is Mexico’s industrial hub. Many of the country’s largest companies are headquartered here, and the city also is home to many factories that manufacture goods for export to the United States and other parts of the world. Other factories are located between Monterrey and the U.S. border, which should make for efficient transport routes.

Monterrey enjoys lower crime rate than many areas of Mexico.

Because it is an industrial hub, Monterrey has the services and facilities we require—reliable computer and phone networks, office buildings of all sizes, parking for large trucks, warehouses, loading docks, etc.

Monterrey is home to several universities and colleges and offers an educated workforce for us to hire from. We should have no problem finding qualified local personnel for our new office, which will save us relocation expenses.

Many of Mexico’s busiest highways intersect in Monterrey, making it the ideal location for transportation business.

There are two other trucking firms headquartered in Monterrey. But they are of modest size, and do not have the advantage of our U.S. connections and contracts.

We will make special effort to market our services to the factories in Monterrey and northern Mexico. Many of these companies routinely ship goods back and forth between the U.S. and Mexico now. We believe that we can do more efficient job than their current carriers.

Monterrey enjoys moderate climate all year round and is not prone to the earthquake activity that sometimes disrupts life in Mexico City. To set up new office in Monterrey, Mexico, we believe it’s crucial to staff the following positions. All positions will be located in Monterrey, Mexico.

Truck drivers operating from this office will be hired via our usual subcontracting arrangements within the U.S. or Mexico. Recommended salary ranges are quoted in U.S. dollars for consideration here, but will be paid in Mexican pesos. Benefits equal to those received by our U.S. employees should also be offered.

The General Manager must have at least three years of management experience within the transportation industry, and possess thorough knowledge of all the legal requirements and standard practices for transporting goods within the United States and Mexico. Sales Manager The Sales Manager will be responsible for securing transportation contracts from Mexican and possibly even Central American companies. We believe that this individual should be Mexican national, but should be fluent in both Spanish and English.

The Sales Manager must have at least three years of sales experience within the transportation industry, and possess thorough knowledge of all the legal requirements and standard practices for transporting goods within the United States and Mexico. The Sales Manager must be able to travel frequently within Mexico. Dispatcher The Dispatcher will perform the same function as our U.S. dispatchers schedule drivers and trucks and monitor progress and deliveries along the scheduled routes. We believe that this individual should be Mexican national, but should be fluent in both Spanish and English as there may be frequent need to schedule pickups and deliveries on both sides of the border.

The Dispatcher must have at least two years of dispatching experience within the transportation industry. Office Manager The Office Manager will answer phone calls and handle all paperwork for the office, including payroll. As the business grows, the Office Manager will need to hire and manage one or more clerks to handle the office paperwork. We believe that this individual should be Mexican national, but should be fluent in both Spanish and English as there may be frequent need to interact with Swainsen’s headquarters in the U.S.

The Office Manager must have at least three years of office management experience, including general bookkeeping experience. Please find enclosed an analysis and position descriptions for proposed new sales and dispatch office in Monterrey, Mexico. As you know, with NAFTA approval of Mexican truck service in the United States, commercial traffic has been increasing exponentially each year between the United States and Mexico. Up to now, we have relied on partnering with Mexican carriers for our transportation contracts that include moving goods south of the border.

In the last seven years we’ve expanded our business from our New Mexico office west into California and Arizona and east into Texas, covering all the border states. We now believe that there is no good reason to leave the south of the border portion of the business to our Mexican counterparts. Swainsen Transport is already well known in the southwestern United States, and we believe that it is now in our company’s best interest to open an office in Mexico as soon as possible.

Makes writing proposals simple and it has taken much work out of the writing for our employees."

There are thousands of proposal topics to choose from in Proposal Pack. This sample uses the following set of Proposal Pack topics: Cover Letter, Title Page, Getting Started, Challenges, Location Analysis, Key Positions, Back Page.
There are 200 complete sample proposals including this one in Proposal Pack.